„Our small packaging division now has case packers, not turntables“

What to do when you have limited space but want to automate, at all costs, to overcome staff shortages? You may well reach your wit’s end, especially if expansion is not an option. That is the dilemma Waterman Onions in the Netherlands has faced for some time. Until last year. It found a solution and is now reaping the full benefits. 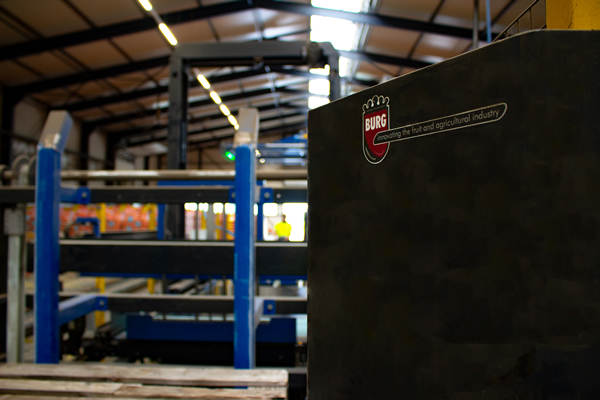 „We absolutely wanted to automate because we were still filling boxes with onions nets by hand, at turntables, in our small packaging department. That took four people at two turntables. It’s not easy to find staff anymore, and people sometimes fall ill. Also, it’s quite hard work. Our operators were always exhausted after a day’s work. And to stack the boxes twelve high, you need at least one strong, tall person. In short, we wanted an automatic box filler and pallet stacker to complement our weighing and net clip machine,“ says Bastiaan Buiting.

Limited space
There was a prerequisite: the automation solution had to fit into the available space. „That was what limited us,“ adds Arjan de Nood of the Dutch company Burg Machinefabriek. „The customer also wanted the option to do two processes simultaneously on the existing four weighers and net clippers line. For example, a small 1kg pack and a second 1,5kg one. That’s, of course, doable, but then you need double machines, which wasn’t ideal, given the limited space available.“ 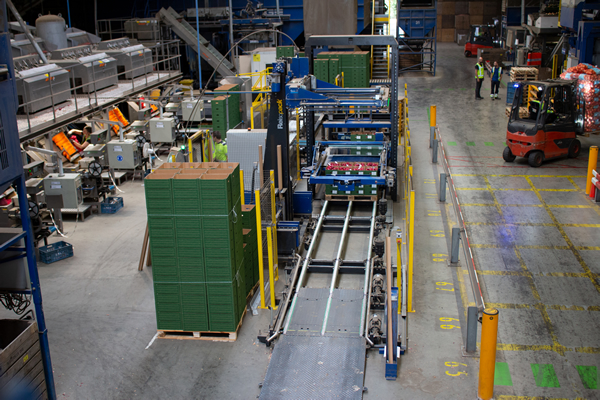 Focus on a single process
Burg devised a plan to focus on a single process because – it was reasoned – that’s much easier to automate. „That went down well, and the project got off to a smooth start. That was also the fundamental difference from other vendors‘ designs. Waterman Onions primarily does large runs for supermarkets, so there wasn’t such a great need for a dual system after all,“ Arjan says. Technically, two simultaneous runs are possible anyway. Burg has provided a bypass so two weighers‘ output can be diverted sideways to another repacker if a small separate run is needed at some point.

Stillness
Until late last year, Waterman Onions still had two people per each of its two turntables. „Now, it’s much more peaceful and quieter at the company, staff-wise too. Everything is running smoothly with the two case packers and the pallet stacker,“ says Bastiaan. „One case packer would have been too few because each of the four clippers still releases 30 net onions per minute, so 120 units per minute in total.“

Once filled with the small 750g packs, eight to a standard box, or 500g nets, 12 to a carton, the containers from both case packers end up on a central conveyor belt. It carries them to the pre-stacker, where the cartons are stacked in groups of two and guided further to the palletizer.

Check weighers are essential
„The hardest part was linking the case packers to the existing net clip machines. Fortunately, we had previous experience with that in other projects, which may also be why Waterman Onions was so confident in us,“ Arjan continues. „You need two check weighers ahead of the two box fillers. Those automatically remove the net packs with outlying high and low weights from the line. It’s not that the weighers do a bad job; they don’t at all.“

„But sometimes, for example, two net bags can get stuck together, or a net package isn’t properly sealed, and the onions roll out. Those nets are then removed. Timing is critical here since each of the four clippers delivers 30 nets per minute. Those nets must pass over the check weigher one by one, so 60 per minute – one bag every second. And there has to be a gap between the nets, which makes good communication with the clippers essential.“

Bastiaan adds that Burg’s automation solution even unstacks the completed boxes that someone stacked and feeds them to the box filler. „The case packers also shake the nets into the proper place in the cartons. We always use standard 300-by-400 boxes, but switching to a different size would be easy. All you do is, feed in a different box and choose a different program.“

Great collaboration from A to Z
According to him, Waterman Onions is delighted with its collaboration with Burg Machinefabriek. They made contact with Burg Machinefabriek via-via. „At that first meeting, they listened very closely to our needs. And when we saw they could give us a very compact palletizer, the project immediately won us over, given our limited space. Other companies‘ palletizers were always slightly larger,“ explains Bastiaan. „It’s been a great partnership, from A to Z, and we’re very satisfied with the after-sales care. They stop by occasionally to check if everything’s still working properly.“

If you don’t modernize, you get left behind
The efficiency improvement has a three-year return on investment, so Waterman Onions is definitely open to further automation. „We’d like to get started with crate logistics, but our lack of space still limits that. These days, machines are often designed first, and the new building’s plans are drawn up around them. Still, we’ve managed to make some random major and minor adjustments over the past four years. You have to invest in modernization. Otherwise, you won’t be competitive in five or ten years. Presently, you must handle large volumes and switch quickly. You can only do that if you keep automating,“ concludes Bastiaan.

And that is precisely where Burg Machinefabriek’s chances lie. So far, this engineering firm has installed its small packaging automation and palletizing systems four times in the Netherlands. There are, however, undoubtedly several other fruit and vegetable companies that would benefit from such a system. And not only in the onion sector; it would work at, say, small citrus or tomato packaging plants too.