What are you getting yourself into? That is what a breeding company production manager’s co-workers thought when he said he wanted to automate all crate logistics. At this particular location, seeds are threshed from the plant, so the incoming crates are filled with plants still bearing seeds. “It was therefore quite the undertaking to automate the crate logistics and this seed threshing. It had never been done, anywhere in the world, before. It was quite challenging, but in the end, we were delighted with the entire line. The way we work now offers so much peace of mind. No matter how big the batch, the machine does its job and people can get on with other things,” says the manager.

Line now completely finished
For the crate logistics, he reached out to the Dutch company Burg Machinery. “This company has years of experience in processing fruit and agrichemicals. That made it interesting to work with them. They could build on the robotic arms they deploy in the fruit industry. We’d also already had good experiences with their brush machine, which we use to clean the crates.”

“My colleagues were impressed with them, and that has been reconfirmed with this project. We’re now running the line for the third year. We started with a compact line, and all the necessary components, such as a brush machine and a sticker scraper, were added later. Now the line is truly complete and is running the way we want,” he says. 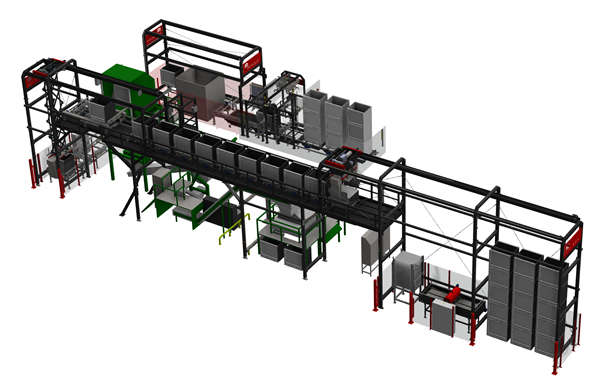 “We wanted a solution for manually feeding the crates into the machine. It usually took one person to do that job, but now the entire crate logistics is automated, from delivered full crates to the clean empty crates. Not only does this save labor, but the entire process is also far more efficient too because new boxes are constantly being supplied and removed during the threshing process. It takes only seconds between emptying those two boxes. Also, there’s such a large stock of boxes that work can continue unmanned during shift changes and breaks. Our production capacity has therefore increased considerably,” says the production manager.

Stacks of five
A forklift supplies the crates, in stacks of five. All the crates have lids to prevent contamination. The Burg robot receives an order to deliver a batch of boxes to the threshing machine. The crates are placed there, also by a forklift, and then the lid is removed and passed, by suction, to the brushing machine. Both sides of these lids are decontaminated. The clean lids are then automatically stacked for storage, where the robot places the crates on a long chain conveyor.

It carries them to the threshing machine. After the crates are emptied, they are transported to the brush machine. Here the boxes are picked up and rotated 180 degrees. They slide over a brush unit, and the inside and outside are thoroughly cleaned. An external dust extractor ensures that the entire process is dust-free. All the seeds released are extracted too. After the empty crates are clean, they are automatically fitted with a lid and stacked. 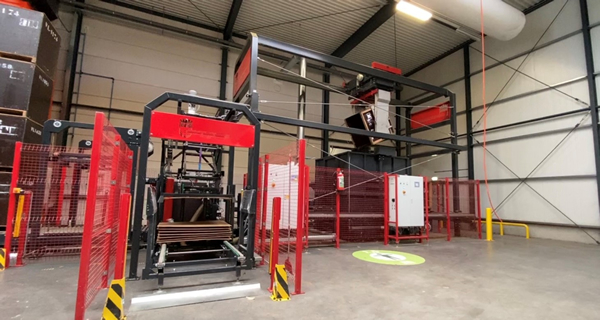 When asked what the biggest difficulty with this line was, the production manager says, “In the beginning, you have to, of course, learn how to operate it. I’d anticipated that we’d initially have to deal with plenty of malfunctions and adjustments. Often these failures arise from things you cause yourself, such as crossing the security line. That’s very annoying.”

“If you have a breakdown, production can’t continue, but with such a new line, there’s no escaping that. It’s nice to be able to rely on good cooperation. Burg gave us excellent service. Technically, removing the crates’ lids using suction cups caused the most problems. At one point we considered giving up, until a smart Burg technician fitted another type of suction cup. It’s been running flawlessly ever since.”

Mood change
His co-workers have also been won over. “If you invent new things, they have to prove themselves in practice. If it doesn’t work right away, people aren’t immediately enthusiastic, but by now, the mood’s completely changed. No one wants to work any other way anymore.” Burg Machinery’s Arjan de Nood, too, is satisfied with the line’s delivery.

“This has generally been quite a special project for us. For example, we delivered our tallest robot ever, and the three portal units are already doing the required box handling. Together, we considered the best solutions concerning efficiency gains versus investment. All in all, it was a very nice project with box automation as the central theme. A great project, for a great customer,” he concludes.

© 2023, Burg Machinefabriek B.V. | All Rights Reserved | Privacy & Cookie Policy | Website: AM Creatie
This website stores cookies on your computer. These cookies are used to improve your website experience and provide more personalized services to you, both on this website and through other media. To find out more about the cookies we use. We won't track your information when you visit our site. But in order to comply with your preferences, we'll have to use just one tiny cookie so that you're not asked to make this choice again. Don't ask me again OK